brought to you by WBR Insights

Automation is a key objective of many supply chain businesses looking to streamline the ways in which goods are passed through them, and British-Australian mining company Rio Tinto , is leveraging the power of automated vehicles to improve its own haulage network.

The historical Spanish mining site of Rio Tinto has been a source of copper, silver, gold, and other minerals since around 3000BC. After being abandoned for a period, the mines were rediscovered in 1556 and taken over by the Spanish government in 1724. However, political and financial issues led to the Spanish government selling the mines to a banking and civil engineering syndicate in 1873. The syndicate registered the ' Rio Tinto Company ' name a month later.

Today the Rio Tinto Group is one of the largest mining companies in the world. It employs more than 50,000 staff, and enjoys revenues of $33,781 million, placing it at #316 on the Fortune Global 500 .

As a key figure in the supply chain industry, Rio Tinto, needs to constantly innovate the way it supplies its minerals to the rest of the world. 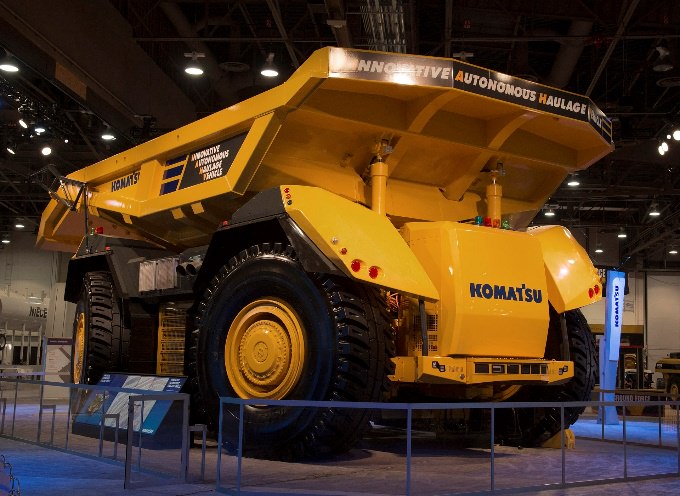 The red desserts of Australia lend themselves particularly well to automation. Not only is the Pilbara one of the most inhospitable working environments on the planet, but it also possesses enormous quantities of iron ore. Removing and processing these material from such a barren environment, is a prime task for an automated haulage system.

Therefore, in 2012, Rio Tinto started its ' AutoHaul ' project, with a view to exploring and implementing automated transport solutions in the area. Fast forward to 2017 and Rio Tinto's 370 vehicle strong haulage fleet, now includes 75 Komatsu automated trucks and is reporting a 15% productivity boost as a direct result of their implementation.

Rob Atkinson , who leads productivity efforts at Rio Tinto, says, "The fleet and other automation projects are already paying off. The company's driverless trucks have proven to be roughly 15% cheaper to run than vehicles with humans behind the wheel - a significant saving since haulage is a mine's largest operational cost. The trucks have significantly enhanced haul cycle times, extended tire life, reduced fuel usage and lowered maintenance costs. And, of course, there is an associated reduction in carbon emissions."

With its new network of automated trucks, Rio Tinto is seeing immediate improvements in the way it delivers its end of the mineral supply chain. However, the company is keen to experiment with other modes of automated transport as well.

Using the same technology which allows driverless motor vehicles to operate without human intervention, Rio Tinto recently completed Australia's first 100% automated rail journey. While driverless trains can be found in London's Docklands and the Metro in Kuala Lumpur, what sets Rio Tinto's journey apart is that it was completed without any input from network operators - a key step on the road to true automation.

Valentin Scinteie , transportation business development manager at Kontron , a global leader in embedded computing technology, explained how the system works. "We now offer very powerful on-board computers that can operate independently of control rooms. They don't depend on large central computers and direct links to control rooms like [Communications Based Train Control] or [European Rail Traffic Management System] does. Instead it offers trains the same platform as [aerial vehicles] and enables them to make decisions themselves using sensors, 3D maps and real-time data."

Once the system is ready for companywide rollout, it is expected that 180 fully automated trains will run the 1500km of track in Rio Tinto's Western Australian rail network. The network connects Rio Tino's Pilbara iron ore mines, with three of the country's ports.

As a procurer of raw materials, Rio Tinto is the first link in a supply chain which stretches the width and breadth of the globe. By automating its haulage network, the company not only manages to boost productivity in one of the most inhospitable regions in the world, but makes significant savings in doing so - both in terms of its finances and environmental impact.

"Rio Tinto is proud to be a leader in innovation and autonomous technology in the global mining industry which is delivering long-term competitive advantages. New roles are being created to manage our future operations and we are preparing our current workforce for new ways of working to ensure they remain part of our industry."

You can hear Rio Tinto's General Manager of Supply Chain and Procurement, Jackie Wang , speak at ProcureCon Canada 2018 in April, at the Hyatt Regency Toronto, Ontario.

Download the agenda today for more information and insights.

*Processing your payment may take a moment. Please click submit payment only once, and do not refresh this page. Doing so may result in your credit card being charged more than once.

We use cookies and similar technologies to recognize your visits and preferences, as well as to measure the effectiveness of campaigns and analyze traffic.
To learn more about cookies, including how to disable them, view our Cookie Policy